Mr and Mrs Dodo love spotting wildlife, but we don’t like to to put too much effort in finding them. Forget about getting up at four in the morning; forget about hiding behind a bush for hours; and forget about paragliding to remote locations. Lucky for us, some animals are very easy to spot on Mauritius.

Nothing screams “Tropical Island” like flashy coloured birds. The Red Fody  was easy to spot with its bright red coat. It might not be as common as the Bulbul with its conspicuous crest, or the Mynah but we’ve seen them plenty of times. 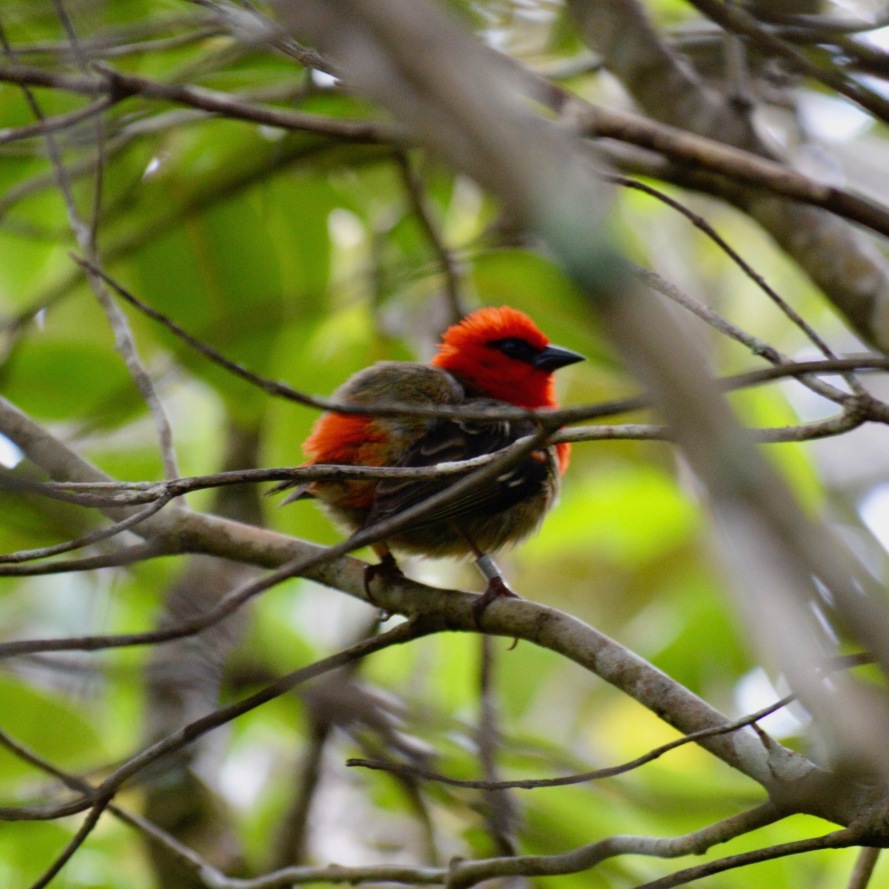 Another common sight were the Geckos, especially in our hotel. The hallways were filled with the sticky little lizards, and every evening when walking to our room, we would say hi to “our” geckos. 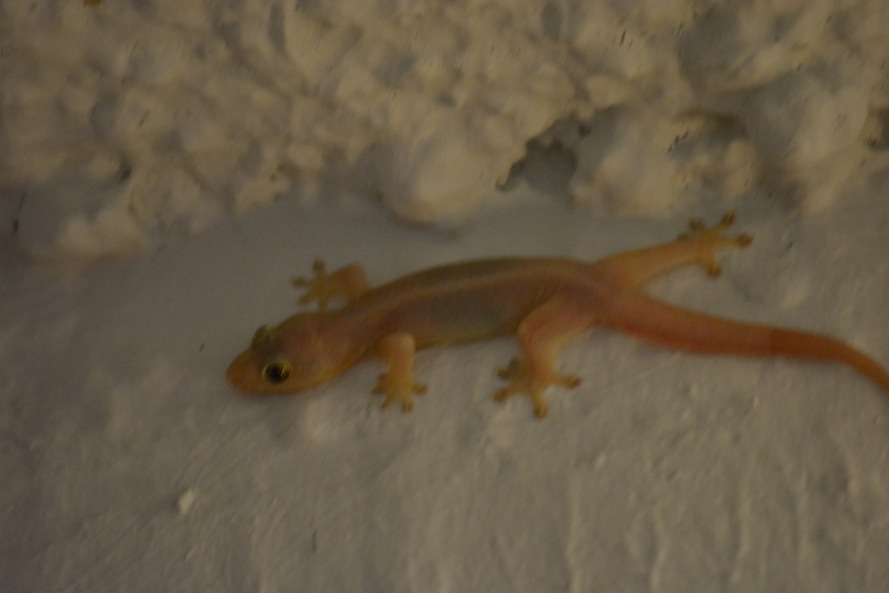 And of course there are the Flying foxes, large fruit bats that can only be found on Mauritius. Every evening at sundown they leave their trees to find fresh fruit. The coolest part about these bats is that they are quite slow – quite the difference from the high-speed bats we have at home.  Mr Dodo is not very good at taking evening pictures, so no photo.

On our second day we went hiking in the Black River Gorges National Park, a mountain range in the southern part of the island. The first part of our hike brought us to the Maccabee Viewpoint, where we had lunch with a beautiful vista:

You can’t see it on this picture, but from this viewpoint we could regularly see the white-tailed tropicbirdgliding over the valleys. When the sun hit them just right, it almost felt like watching Game of Thrones.  They are fast and far away, so this was the best picture I could shoot:

We continued our hike to the top of a nearby waterfall. The closer we got to the water, the more frogs (https://en.wikipedia.org/wiki/Mascarene_grass_frog) we saw hopping around. This tiny frog was spotted by mrs Dodo: 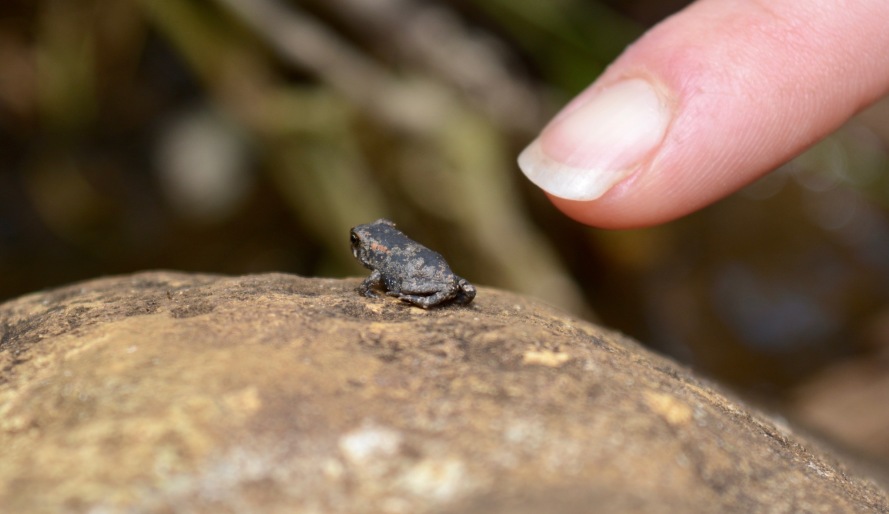 The national park also houses a large population of monkeys, but they are shy and we did not spot them.

On Saturday we went on a Catamaran trip in the vicinity of Flic en Flac. Our main goal: swimming with the dolphins that frolic around there every morning.

The approach is simple. The captain would look out for dolphins, and once he spotted them, start the chase. The catamaran would overtake the dolphins and cut them off, at which point mrs Dodo would jump into the ocean, right into the path of the approaching dolphins. Meanwhile, mr Dodo would stay behind on board and take actual pictures:

On our last day we went to the Île aux Aigrettes, a coral island on the south east coast of Mauritius. Scientists have restored this island to its original state, allowing only the flora and fauna that existed on Mauritius before the Europeans discovered it. You can only visit it with a guide who will help you point out all the interesting parts.

The most noticeable animals are the tortoises. Tortoises were an important part of the Mauritian ecosystem but unfortunately we Europeans ate them all. As it turns out, the Aldabra tortoises are a reasonable replacement, and they are now thriving on the island: 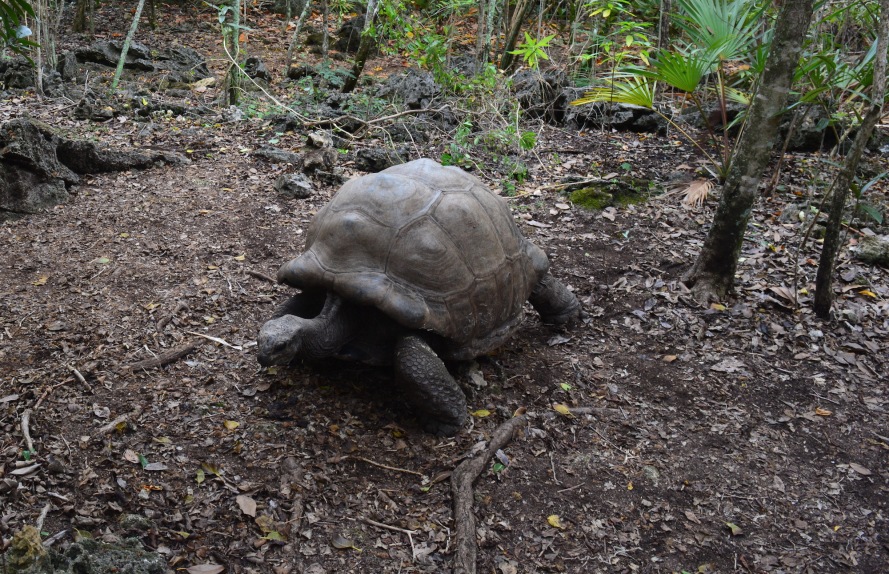 The island is also considered home by the Pink Pigeon. As its name implies, this is a pigeon with a pink coat. In 1990 they were almost extinct with only 10 birds remaining, but they really like living on this island and their numbers are growing slowly. They are not super easy to spot, but thanks to our guide we managed to find a pigeon:

The Dodo has been extinct for about 350 years, so we failed to see them in the wild. However, they are featured in every tourist shop. Our visit to Mauritius could not have been complete without seeing these fake dodo’s.