At the beginning of time (or at least the moment we started counting after a certain special baby was born) many different ‘barbarian’ tribes lived in Germany. Like in most parts of Europe during these days, there was also a Roman presence. These legions in the northern parts of Germany were under the command of Varus. His job was to convince the barbarians of the Roman way of life. Anyone who has read Asterix and Obelix can imagine how the locals responded to this plan… Even though the different tribes normally pillaged and burned each other, Arminius was able to convince 4 of those tribes to work together and focus on slaughtering the Romans for a change. 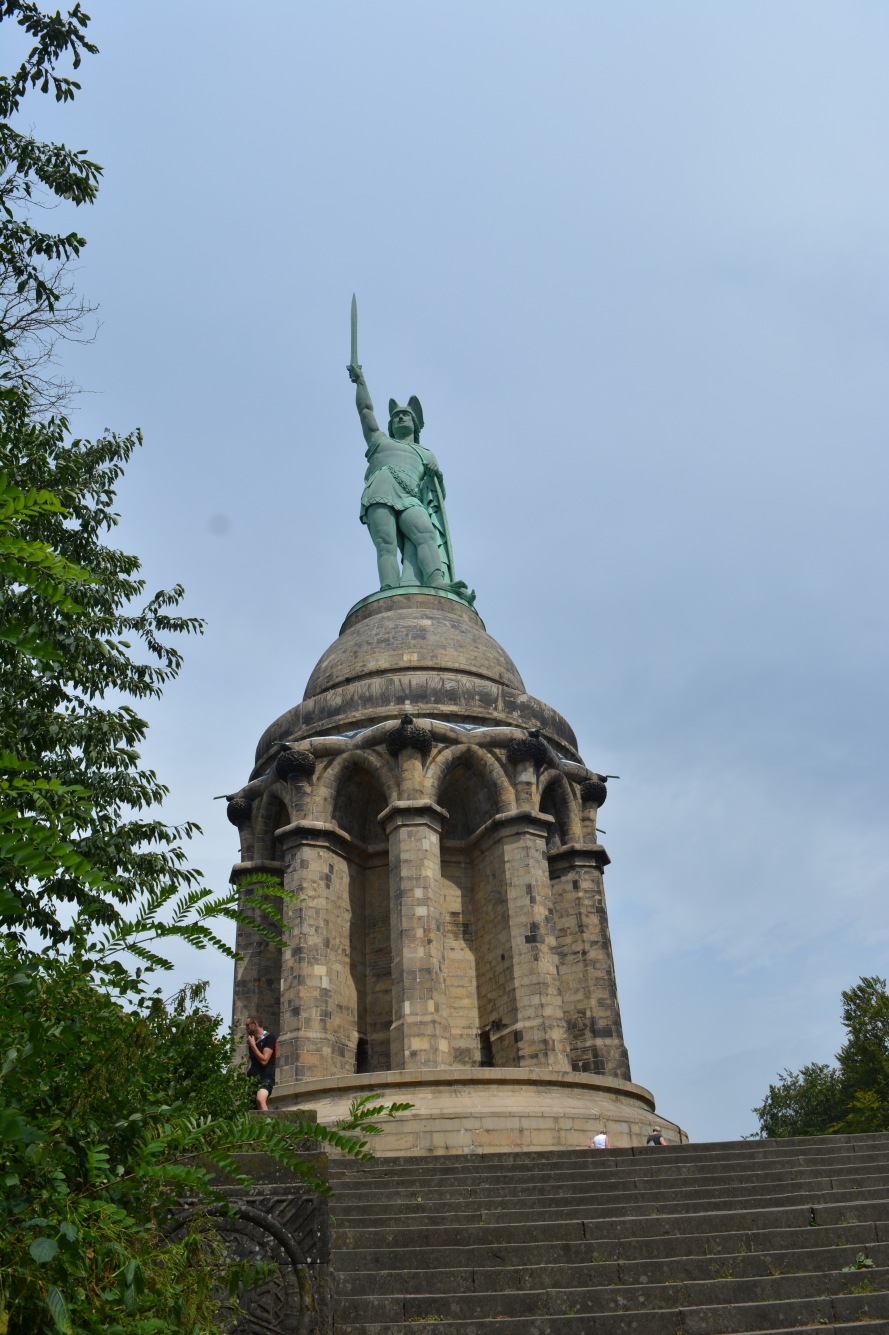 Arminius tricked the Romans into the Teutoburger forest, by fabricating a local uprising. Varus and his three legions marched through this deep, dark and soggy forest when Arminius and his men started their guerrilla campaign. I say guerrilla campaign, because the German fighters were outnumbered by the Roman soldiers and had to use their knowledge of the terrain to lure them into traps in order to gain the upper hand in battle. The Roman soldiers did not know their way around the forest, were not equipped for this terrain (which got even worse when it started to rain) and were surprised every time the Germans attacked. In the end, virtually every Roman was slaughtered and Varus took his own life out of shame.

This battle, the “Varusslacht” described as the Varian Disaster (Clades Variana) by Roman historians, is known as one of Rome’s greatest defeats – and therefore one of Germany’s greatest victories. So who better to build a gigantic statue of when wanting to emphasize German greatness?! It was Ernst von Bandel who designed Germany’s biggest statute that triumphs over the forest where Rome’s biggest failure took place.

Hearing this, you might think it will doom over you as soon as you start driving towards the forest. In fact: you can hardly see it until you stand right in front of it! I actually had the same experience when visiting Mount Rushmore. You’d think that you would see the enormous faces of the US’s famous presidents from miles away, but the black mountains are just so huge, that you can only make out the faces in maybe the last corner before you drive up to the visitor’s centre. Well, the same goes for this 53 meters high Arminius. But, the view from within Hermann (which is the German translation for the Latin name Arminius) is quite spectacular.

The story about the building of this Roman ass-kicker reminded me of that of the Crazy Horse memorial; a mountain carving of the Indian Crazy Horse, a 10 minute drive away from Mount Rushmore. In both cases there was a man with a dream. A dream to build his hero from stone. Both men devoted most of their adult life and private fortune in their project. The only difference being: Ernst von Bandel was able to see his Hermann finished (although in the nick of time: it was finished in 1875 and he died the next year), while Crazy Horse is still unfinished.

The house (right next to the Hermannsdenkmal) where Ernst von Bandel and his wife lived.