The Great Ocean Road, also known as the B100, is the most famous scenic drive along the south coast of Australia, stretching from just below Melbourne to Port Fairy. It’s almost impossible to visit Australia without at least considering driving here, so we decided to do just that. 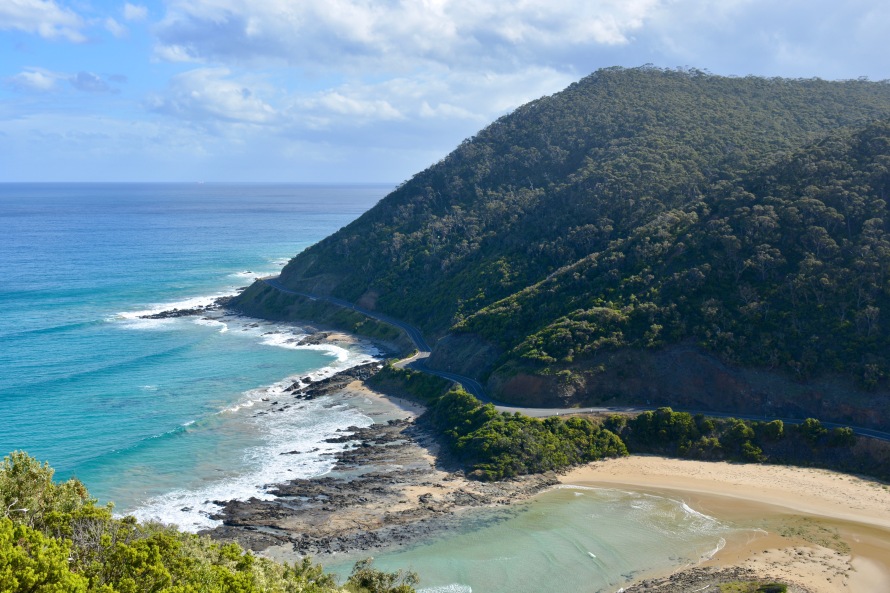 Before I go on telling about the beautiful and exciting things we’ve seen, a few warnings to those with identical plans: a lot of time you will not actually see the ocean; you will see all the great views that everyone talks about, but between these views you’ll see a lot of boring country side.

It also turns out that all the green stuff in Australia is fed by actual rain. And for all the distance between them, driving on the wrong side of the road through the rain while watching wet sheep is the same in Australia as it is in Wales.

But the highlights are stunning, and some even more so because of the wind.

Since the road is only 250km long, you can drive it in one day. If you want to enjoy the sights as well, it makes more sense to split it up. We decided to split the drive in two parts and stay the night in Port Campbell.

Staying at Port Campbell also allowed us to something quite unique: the penguin colony at London Bridge coming home. We originally wanted to see the Penguin Parade at Phillip Island, but traveling from Melbourne to Phillip Island by public transport is almost impossible. Rumour had it that the penguin colony at London Bridge basically does the same for free, albeit in far smaller numbers.

So there we stood at the London Bridge viewing platform, in something that felt like subzero temperatures, waiting for the little birds to come home.

As it turns out, the penguins at London Bridge live on the right side of the viewing platform near the grassy hill; they took their time and came out 20m after sundown; and we counted about 20 penguins at the most. Moreover, the Fairy Penguin is really small so all you see is waggling black blotches on a grey beach. It is still a magical experience though.

The next day, the weather had all but improved. The Great Ocean Road is built just like a National Park, with all kinds of dedicated lookouts along the side. We spent quite some time sitting in the car at a carpark, waiting for the rain to subside.

But to be fair: seeing the famous Twelve Apostles amidst a raging sea makes it obvious how centuries of erosion turned the sandstone cliffs into what they are today.